How to Get the Very Best Return on Investment From Your Diet & Exercise, Explained by Ted Naiman, MD 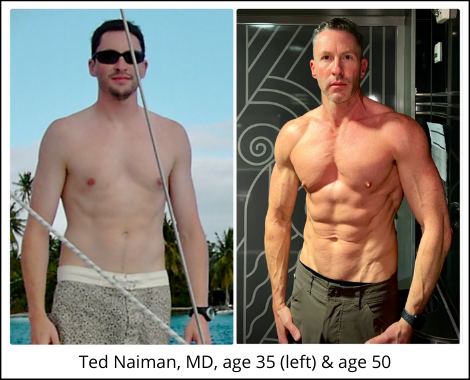 I first had the opportunity to speak with Ted Naiman, MD, in late 2020, when we discussed his popular book, The P:E Diet, for an article published on the Simply Snackin’ website that we thought might bring down our server.

Dr. Naiman explained the principle of his protein:energy ratio, which is one of the foundational elements of his book. He described how one can use the P:E ratio to lose weight sustainably while lowering body fat percentage and adding lean mass with an intense but efficient exercise plan.

Dr. Naiman is a board-certified Family Medicine physician located near Seattle, Washington, but he has become well-known to people interested in nutrition and fitness across the globe.

Nearly a year and a half later,  that article about the P:E Diet continues to drive thousands of web visits per month, and we’ve had several requests for a follow-up article.

Last month, Dr. Naiman sat down with me for another interview, and we talked about exercise and nutrition, with an emphasis on how busy people can get the very best return on their investment of time and energy as they seek to improve their health, weight, quality of life, and lifespan.

Many also seem to appreciate the photos and videos he occasionally posts that demonstrate his own personal success gained from following his own advice. A before/after image of Dr. Naiman posted last month (shown above) shows him at age 35 and 50, with a much more lean, muscular physique in the current photo.

The P:E Diet, satiety per calorie, & the importance of protein

Dr. Naiman created a P:E ratio calculator which allows people to easily determine a food’s P:E ratio with nothing more than a food nutrition label.

In general, according to Dr. Naiman, foods with a protein:energy ratio higher than 1.0 are considered to have a relatively high protein density and are typically more satiating per calorie.

We were pleased to see that all 10 Simply Snackin’ beef and chicken flavors have a P:E ratio above 1.07, and three flavors have an incredible 5.5 ratio.

“Many of us in the low carb world have missed the boat when it comes to energy density,” said Naiman. “We will shave off every gram of carbohydrate, but neglect the fact that the largest drivers of satiety per calorie are protein percentage and energy density.”

Dr. Naiman has now taken the protein:energy ratio a step further with a Satiety Score calculator that factors in the weight of the food as well as the protein, fat, carbs, and fiber content. The calculator provides a Satiety Score that can be used to help guide food choices. In general, foods with a higher satiety score are presumed to provide a greater degree of satiety per calorie.

“Everyone's going to be slightly different,” said Dr. Naiman, “But I think directionally there's some universal truths, and I think that eating more fat and more protein is probably way more satiating for most people. The problem is, most people can't really tell how many calories they just ate. They have a hard time actually deciphering that.”

Dr. Naiman recommends that those trying to lose weight or change their body composition should use the calculators and track everything for at least a couple of weeks, until they get an idea which foods really do provide them with more satiety per calorie.

“You’ll start getting an idea of how full you are, for a given number of calories consumed. Tracking is really the only way to really get a good grasp of that. Honestly, everyone just eats it until they're full. The only difference between somebody who's super lean and somebody who's super fat, is they managed to get full with fewer calories.”

Dr. Naiman says the secret is choosing to eat foods that give you a high level of satiety for less calories.

“This is how energy density works,” says Dr. Naiman. “It is a big deal. Once you dial in your protein percentage, the next step is lowering the energy density of your non-protein energy (carbs and fat).” 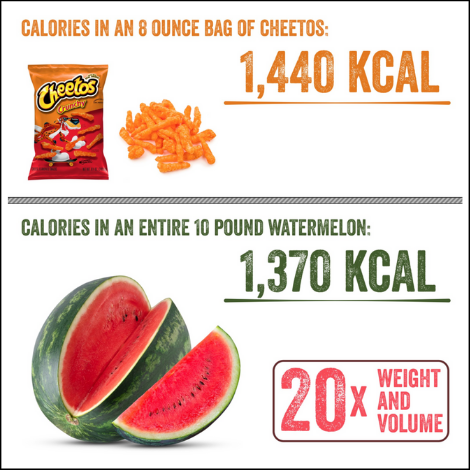 Since writing The P:E Diet book, Dr. Naiman said he wishes he’d spent more time explaining some of the intricacies of energy density, the importance of the satiety score, and what types of carbohydrates might be best to include in one’s diet.

He is currently working on his next book, which will tackle those topics, among others, in greater depth. The working title of the new book is Satiety Per Calorie.

In The P:E Diet book, Dr. Naiman addressed “demand training” which aims to teach you how to reach a goal of “achieving the highest lean mass you can—while maintaining the lowest fat mass possible (without starving yourself)."

Demand training, according to Dr. Naiman “is about communicating to your body that an adaptation is required. The best way to communicate that message is by “maximizing the intensity and effort of your activity.”

When one pushes to the point of failure, according to Naiman, the body responds with an adaptation—it adds more muscle and larger muscle. Then, using the concept of progressive overload, you continue to demand more from your body, and the body continues to respond.

A common problem, according to Naiman, is that most people fail to create an exercise program they can stick with over time.

“Most people's plan is far too elaborate, and way too time consuming, and they’re never able to sustain it,” said Dr. Naiman. “You're so much better off with the most accessible, quick, easy, and sustainable program you can possibly come up with.”

In the P:E Diet Book, Naiman discusses the benefits of cardio and resistance training. Both, he says, can be performed for relatively short durations as long as the intensity is extremely high. He explains that this high intensity nano-workout, done consistently, increases the number of mitochondria and improves the body’s capacity for burning fat.

When it comes to exercise, there are three basic variables, Naiman says. They are:

In order to get the best possible results with the best efficiency (the greatest return on your investment of time), Dr. Naiman says one must focus on intensity and frequency.

“Let’s say you’re 50 years old and you’ve never worked out before,” said Dr.Naiman, “but you decide that each day you’re going to do the hardest set of the most difficult pushup variation you can possibly stand. If you go all out and hit extreme failure each time, eventually you’ll have a ridiculous amount of pushing strength.”

Even with as little as a minute or so each day, if one pushes to failure consistently over time, the body will respond by building more muscle as an adaptation. 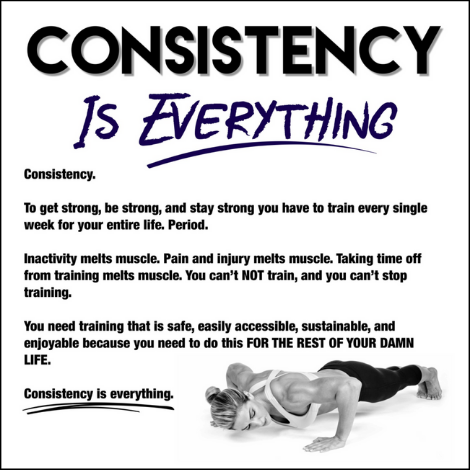 The book provides illustrated examples of exercises that hit each of the three categories as well as progressions for beginners all the way up to accomplished experts.

The most time efficient protocol, according to The P:E Diet book, “is a Triple Set, done to Triple Failure, of the Triple Moves: push, pull and legs. This can be accomplished in just 12 to 15 minutes and will generate excellent results if done every other day.

“With this approach, it’s mega-sustainable with a great return on investment,” said Dr. Naiman. “If you expend a high amount of effort, and really hit failure, you could reach 80% of your genetic maximum in just 10 minutes or so every other day. That’s a huge ROI on the time spent.”

“What you really want to do is establish a habit, and then do it forever. And I think that's the secret. I think most people make things so complicated that it's doomed before it even starts.” 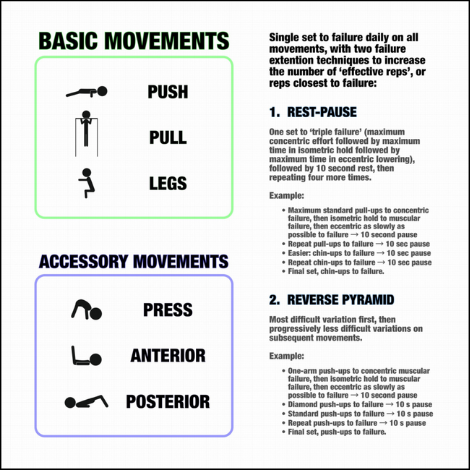 The image above shows an entire resistance training program, which can be completed in no more than 15 minutes. The only equipment required is a pull-up bar.

“BASIC AS HELL == HIGHLY EFFECTIVE” tweeted Naiman. “Consistency, intensity, and progression are everything.”

The biggest reason why so many people fail to see the results they desire is a lack of consistency and low intensity, according to Dr. Naiman.

“You see these people who go to the gym all the time, they're in the gym for more than an hour, and they're there every other day, but they never get stronger, and they never look better. And the problem is, their intensity of effort is pretty low.”

The good news, according to Dr. Naiman, is that with a workout that only lasts 12-15 minutes, one only has to sustain that intensity for a limited time.

“Intensity of effort is the single most important thing when you're trying to get beneficial adaptations to exercise,” he said. “You're basically chasing the feeling of extreme muscular failure, and, until people understand what that is, and get comfortable with that, they're basically never going to get anywhere and their return on investment is going to be disappointing.”

To learn more about The P:E Diet book or to order a digital or print copy, visit the website here.