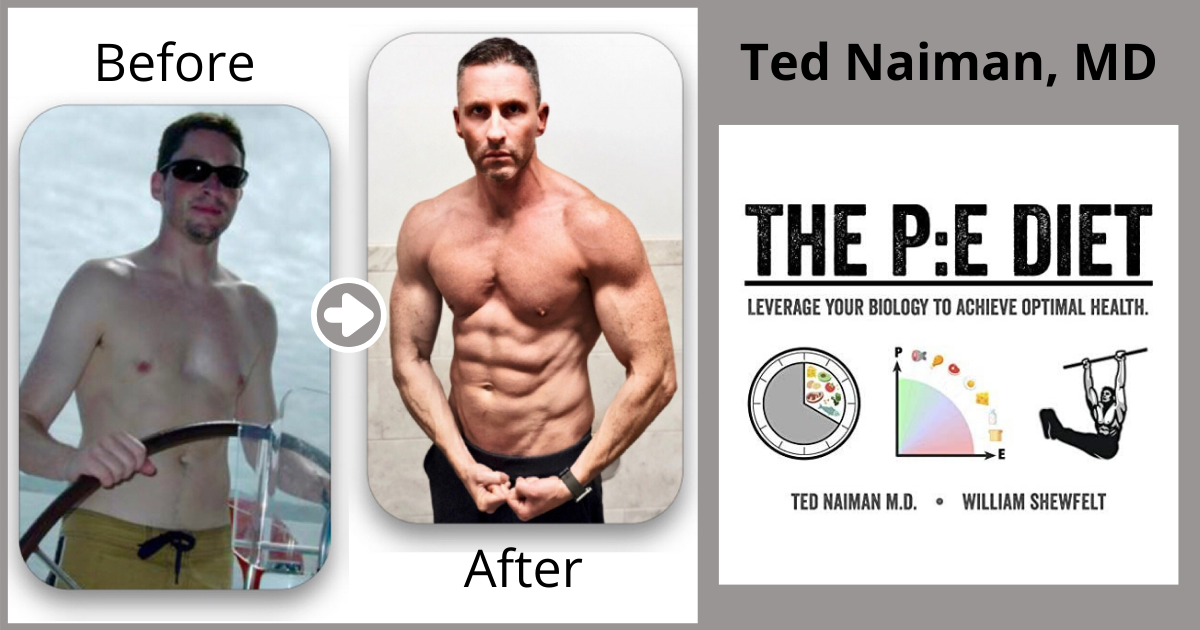 Chris S, Cornell writes about nutrition and fitness. Information is for informational purposes and is not medical advice. Consult a qualified medical practitioner for advice.

Dr. Ted Naiman is a board-certified Family Medicine physician located near Seattle, Washington, but he has become well-known to people interested in nutrition and fitness across the globe.

The P:E Diet book, which he co-authored with William Shewfelt, is described on the book’s website as the simplest and most practical diet and exercise book ever written. It lives up to its billing.

In the prologue of The P:E Diet, Dr. Ted Naiman estimates he’s had about 100,000 physician/patient encounters in his 20-year career.

“One moment I could be examining the healthiest professional CrossFitter you have ever seen, with a chiseled-from-granite body and absolute perfection for lab work,” he wrote.

“A frail and weak shell of a human, struggling just to walk, with a problem list a mile long and failure of a dozen different organ systems.”

Somewhere along the way, Naiman started asking himself what accounted for the differences between the healthiest patients and the least healthy.

One day Dr. Naiman came to a shocking realization.

“Most of the time,” he realized, “the only difference between the fittest people on earth and the most decrepit really did just come down to two things: diet and exercise.”

Naiman’s ability to break down complicated fitness and nutrition concepts and explain them simply—often with easy-to-understand charts and diagrams—has made him extremely popular on social media.

One of the first things his new Twitter followers notice is a set of shirtless “before and after” photos that demonstrate the results he achieved following the P:E diet and doing short but intense daily bodyweight workouts. Naiman weighed the same in the two photos, but has obviously replaced a good deal of body fat with lean muscle.

The goal, according to Naiman, is to target foods that have higher P:E ratios and steer away from foods with lower P:E ratios. Naiman also urges people to avoid refined carbs and fats.

Naiman has created a web-based app that calculates the protein to energy (P:E) ratio of any food when you simply plug in the food’s protein, fat, carbohydrate and fiber numbers. Most people would benefit from eating more foods with higher P:E ratios, according to Naiman.

A food with a P:E ratio of 1.0 or higher is considered to have a relatively high protein density.

When he shares a screenshot on Twitter of a food item with a particularly low P:E ratio, his Angry Protein Cat makes an appearance (see image below). A recent tweet featured a Baskin Robbins peanut butter and chocolate milkshake with a P:E ratio of 0.16. 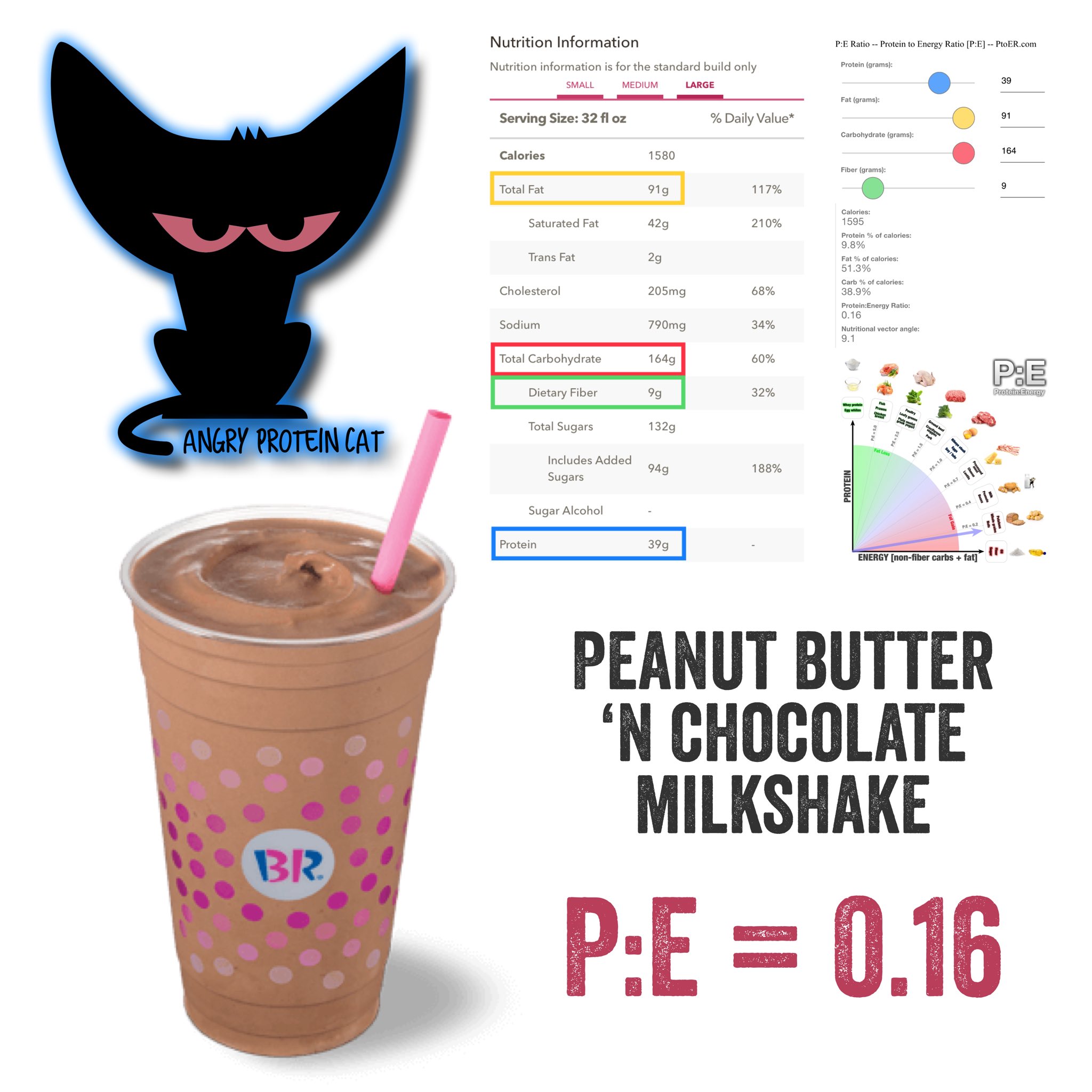 “My advice is for people to make incremental changes to their diet.” he said. “You have to realize where you’re at, and then choose foods that are incrementally higher in protein and fiber, and lower in carbs and fat.”

Naiman notes that adding high protein foods to the diet actually make eating fewer carbs and fats easier. He explained that humans are programmed to eat until they have consumed an adequate quantity of protein—even if that means they have to significantly overeat carbohydrate and fat energy to accomplish that.

What that means for most of us, according to Naiman, is that by eating more higher protein foods, we will become satiated sooner, and are likely to consume less total carbohydrates and fat.

While adding protein, Naiman advises people to decrease carbohydrate frequency in order to force the body to become more fat adapted. Once the body is fat adapted, one is able to function using stored body fat without the constant need for carbohydrate intake.

Another key point, according to Naiman, is to avoid foods that are high in both carbs and fats. “Foods high in both fat and carbs are rarely found in nature,” Naiman said. “They hijack our satiety and drive us to overeat.”

Naiman, who weighs about 160 pounds, says his daily food intake includes approximately 200 grams of protein, 100 grams of fat, and 100 grams of carbohydrates, depending on activity level and how hungry he is on any given day.

While he supports low-carb diets, Naiman says there may be negative consequences to eliminating carbs entirely.

“Humans have a very specific appetite for four things: protein, fat, carbs, and minerals. If you exclude any one of these entirely, you’re going to have this certain hunger that you may never be able to satisfy, and you might end up overeating one of the other components just in order to satisfy that hunger.”

“I really think the optimum level of any macronutrient is not zero.”

Seed oils, on the other hand, we would do well to avoid completely, according to Naiman.

“It’s pure, refined chemical energy. We’ve stripped all the edible energy out of otherwise reasonable food, so you’re just eating pure energy. And ancestrally, our Omega-3:Omega-6 ratio was probably somewhere around 1:1. I think that ratio just gets blown out by industrial seed oils”

Naiman is well-known on Twitter for his 15-minute bodyweight workouts, done at an extremely high level of intensity. It’s harder than it looks, he said, and out of the comfort zone for most. But intensity is required to achieve results.

An image in the P:E Diet book, makes use of the popular expression “You can’t outrun a bad diet,” but follows that line with another: “You also can’t out-diet ZERO TRAINING.”

“Being sedentary and not putting maximum tension on your bones and muscles literally melts down your lean mass,” said Naiman. “It’s quite devastating from a health perspective.”

“On the flip side, if you do put absolute maximum tension on your bones and muscles, you literally grow them. They get bigger and stronger and better.”

The P:E Diet book addresses “demand training” and aims to teach you how to reach a goal of “achieving the highest lean mass you can—while maintaining the lowest fat mass possible (without starving yourself)."

Naiman performs a small number of sets to failure each day, working the push, pull, and leg chains of the body, utilizing the progressive overload technique. The book describes how to do a wide variety of exercises and options for how many sets, frequency, and more.

So what advice would Naiman give to someone who is having trouble getting started on their nutrition and fitness journey?

“You need to add something else in your life that raises dopamine. Something that’s not food. You need to get addicted to some kind of sport or activity that gets you moving around. If you can raise the dopamine in other ways, then you don’t need the Doritos.”

Naiman raises his own dopamine levels by playing Ultimate Frisbee, playing bass in bands, and doing his bodyweight workouts.

When asked if the P:E Diet would be suitable for individuals suffering from metabolic disease, Naiman said “I think there’s potential for anyone. We actually have studies that show that if you have insulin resistance, it is not any more difficult to lose fat than if you were metabolically healthy.

When asked about the ongoing diet wars and tribalism that has developed around different diets, Naiman said nearly all the diet factions share a common bond.

“The one thing we all have in common is we avoid the combination of refined carbs and refined fats. This seems to be universal to all the diet religions. There’s certainly more in common than we would like to admit.”

“My goal is to take all the good from all the camps, and leave the bad behind.”

To learn more about The P:E Diet book or to order a digital or print copy, visit the website here. 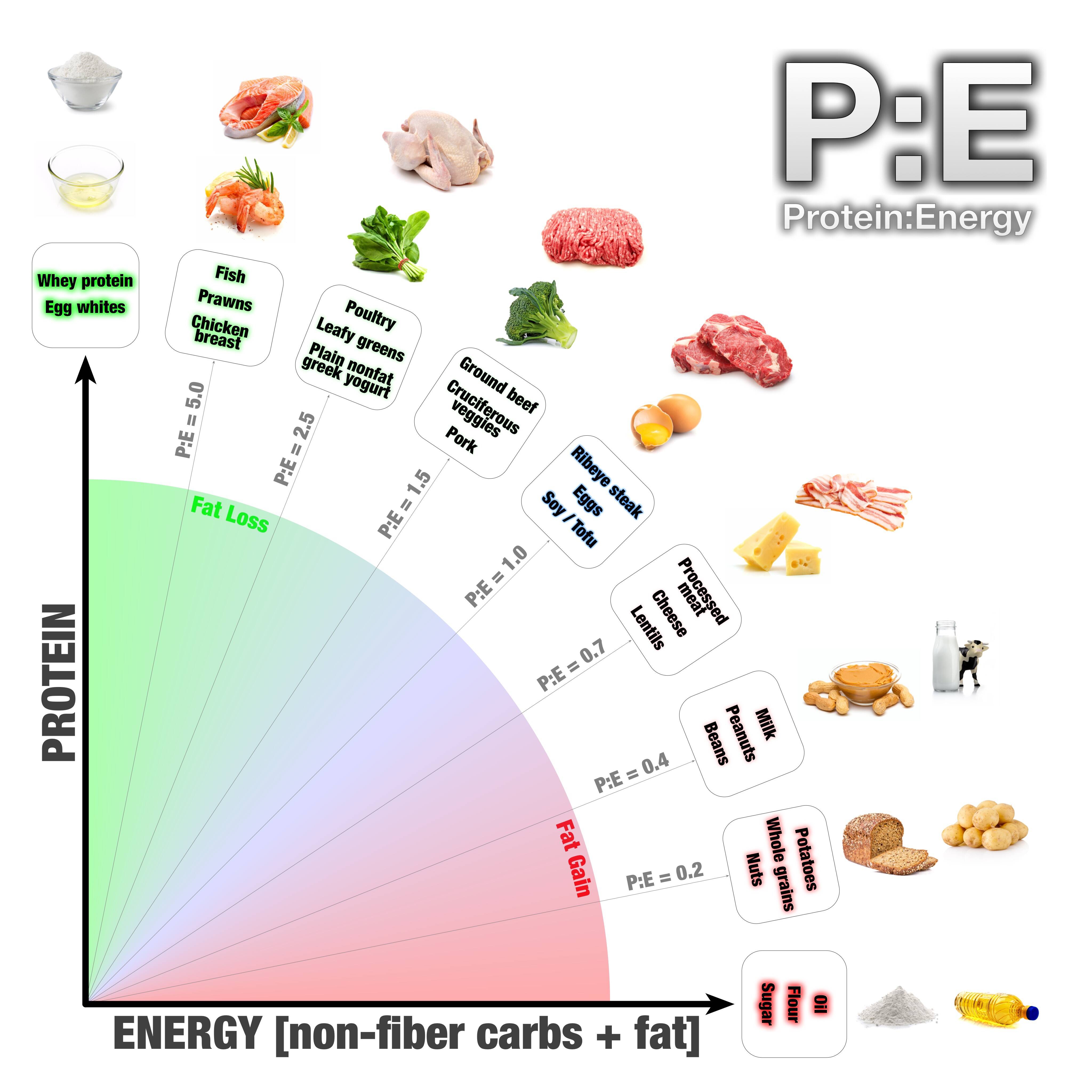 We were curious about the P:E Ratios of some foods most people are familiar with, so we took Dr. Naimon's calculator out for a test drive. Here is what we learned:

We had so much fun using the P:E Calculator, we decided to figure out the P:E ratios for the entire line of Simply Snackin' high-protein, low-carb, beef and chicken snacks: