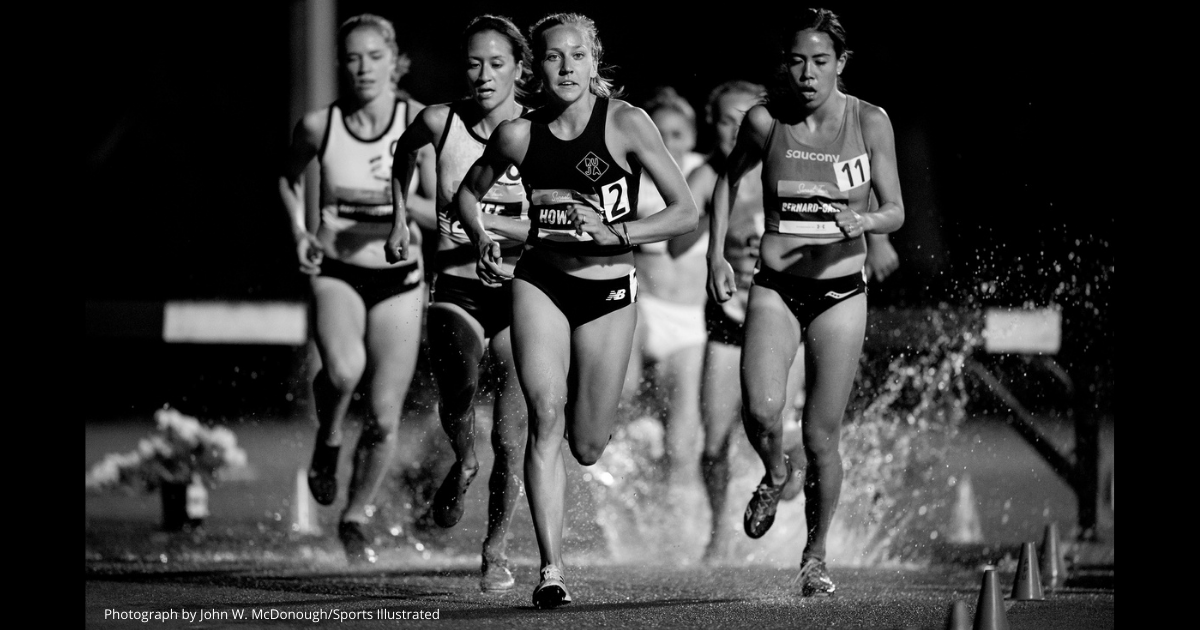 Like so many of us, Marisa Howard’s best laid plans were interrupted last March when the COVID-19 epidemic hit our country’s shores. At the time, Howard was counting the weeks to June when she was to compete in the 2020 Olympic Trials for the women’s 3,000 meter steeplechase.

“We were having dinner with friends, and we started seeing that the NCAA basketball tournament was cancelled,” Marisa recalled. “All of us thought there’s no way they’ll cancel the Olympics. Initially we were hopeful that the Olympics would still go on. Then my coach started texting me, and said it was looking like everything was going to be delayed.”

Marisa had qualified for the U.S. Olympic Team Trials with a silver-medal-winning performance at the 2019 Pan-American Games, held in Lima, Peru. She finished with a time of 9:43.78, just two seconds behind winner Geneviève Lynn Lalonde of Canada.

As it turned out, the 2020 Olympics to be held in Tokyo, Japan were indeed postponed by the coronavirus, and Marisa had to quickly alter her plans.

“At that point, we decided to go back to base training and stop going for hard workouts,” said Marisa, who would now have to wait an additional 12 months to push for her dream of earning a spot on the U.S. Olympic Team.

Although the change of plans was challenging, in the true spirit of a steeplechase athlete, Howard took the news in stride.

“I feel like emotionally I was okay,” Marisa said. “My faith has been a huge part of my running career. I just kind of leaned on that during that time. There are a lot of things that are just out of my control. I have to control my attitude and try to best prepare for next summer.”

She also confided that the delay affected more than just her athletic aspirations. “The other difficult part of this was that my husband and I were planning to start a family after the Olympics, so that will also get delayed another year.”

Marisa was quick to acknowledge, however, that there are large numbers of people whose lives have been significantly affected by the pandemic, and that her primary objective is to make the best of the situation.

“There are many people who are a lot worse off than athletes,” she said, “so I just try to keep it all in perspective. Running wasn't taken away from me. I was still able to go outside and run every day, so I was thankful for that.”

Marisa’s strongest event when she competed for Pasco High School High School in Washington was the two mile, but she picked up the steeplechase at Boise State because there’s no other two-mile or 3,000 meter event for college women.

“I knew the distance of the steeplechase (3,000 meters) was good for me,” Marisa said, adding that she liked the obstacles, which require additional athleticism from the competitors.

The women’s 3,000 meter steeplechase has a total 28 barriers (that are hurdled) and seven water jumps.

“You have to be able to react to different situations. I’ve fallen in the water, and people fall around you. There’s people that trip… You have to have some agility to react to those situations quickly.”

“It’s also a lot of fun. I love the fact that I’m not just running in circles lap after lap. I would argue it's one of the best events to watch at a track meet.”

In her redshirt sophomore year at Boise State, Marisa took 25 seconds off her previous best time at the regional meet and qualified for nationals. From that point on, she stuck with the event and has continued to rise in the ranks.

In her junior year, she took second at the national meet, and as a senior she placed fourth in one of the deepest fields ever for the steeplechase.

At 5’3”, Marisa is one of the smaller steeplechase competitors, but she says her efficiency on the hurdles and low center of gravity work to her advantage.

Following her standout performance at last year’s Pan American Games, Marisa was gearing up for the run leading up to the Olympic trials. The pandemic not only postponed the Olympics, but also greatly curtailed opportunities to compete for several months.

“Unfortunately with COVID, we didn’t have any steeplechase on the schedule this summer, so I was forced to work on some of my weaknesses, and concentrate on other events, which was really good for me long term as an athlete,” said Marisa.

Over the past few months, Marisa competed in a couple of 1,500 meter races and a 5K race, and then, two weeks ago, she placed second in the USA Road Mile Championships at Drake University, her highest U.S. finish ever in any event.

“It has been an awesome opportunity to work on other events, which I think will give me more confidence in my steeplechase next summer,” she said. “Those other successes are going to set me up really well to have a shot to make the team, which I’m excited for.”

Marisa has already qualified for the Olympic Trials by virtue of the 9:36 time she recorded last summer at the Sunset Tour in Los Angeles in Los Angeles, but she must turn in a time under 9:30 and place in the top three at the Trials next June in order to secure a spot on the U.S. Olympic Team. She is shooting to break 9:30 when the qualification period reopens this December. The steeplechase trials will be held June 20, 2021 (first round) and June 24 (finals).

So what does the training regimen look like for an aspiring Olympian? How much distance does one need to log in order to compete at this level?

“I had a lot of injuries in college and my first year post-collegiate, so I’m actually pretty low mileage compared to some of the other elite runners,” Marisa said. “I top out at about 50 miles per week, which I know for the average person seems like quite a bit. Many other women are probably doing 75-80 miles per week.”

Marisa runs five days a week, but also does cross training four days per week, which means she has a couple of days a week doing double workouts. When the pool she normally trained in was closed due to COVID, she bought a road bike and started doing a lot of her cross training on the bike. When the weather got warmer, she found a pond where she was able to get some swim training in.

“Most people are fair weather people,” she said. “We train almost year round outside in Boise. Very rarely do I have a day when I can’t go outside. Unless there’s over a foot of snow or it's very icy out, I’m outside training almost every single day.”

Her schedule as a school nurse works well for her training. She works three days a week and has Tuesdays and Fridays off, which allows her to have time for her double workouts.

“I plan to take a leave of absence in April and May to get ready and give myself the best shot to make the team next summer.”

Marisa is currently pursuing a Masters Degree in Nutrition, and hopes to one day use her education to run a nutritional wellness program for a large corporation. She’s a strong proponent of preventative medicine and avoiding medical issues before they arise, something that is often lacking in western civilizations.

“Many of the people who have been hit with COVID have underlying diseases and conditions, such as diabetes and obesity. In the U.S. we have been hit really hard with these things.”

“I would tell people to address the things that you can control. The outside is not taken away from us, so get outside and get from fresh air. Get out in the sunshine and get some vitamin D. Do some walking and move your body every day.”

Marisa said the lockdown was a perfect opportunity for people to take up a new hobby or activity. She said she and her husband made a habit of each shooting 50 baskets each day on an outside basketball hoop.

Marisa also stresses the importance of a healthy diet. “It’s really important to eat whole foods for nourishment, and to know what you’re putting in your body,” she said. “I fuel my body with whole foods that I know what’s in them. I don’t eat out often. The majority of the time I’m eating foods that I cook at home.”

Marisa says she loves cooking, and mentioned that one of her favorite cookbooks is Run Fast, Eat Slow, written by Olympic silver medalist Shalane Flanagan and best-selling author Elyse Kopecky.

“As athletes, we are working really hard every day. It’s important to reward your body with good food.”

Running on Simply Snackin’ - Marisa was first introduced to Simply Snackin’ low-carb protein snacks when she was in Peru last summer for the Pan American Games. “I was never a big jerky fan,” she said, “but I love Simply Snackin’. It doesn’t taste like anything I’ve had before.

“Nutrition is huge as a runner,” she added, “and we need to be getting fuel in us within 30 minutes of exercise. To be able to have a couple of these in my backpack right after a run, and not have to wait until I get home to make something is awesome.”

Simply Snackin’ is available in 10 varieties of chicken and beef, and Marisa says she loves them all. “They taste great—I love all the different flavors. They are a super easy snack to go to and they’re healthy. I’d rather eat something with protein in it that tastes good, rather than snacking on crackers or cereal, or something that has a lot of sugar in it. It’s a great go-to. I’ve loved using it in my training over the past year.”

Giving Back - Marisa and her husband together coach boys and girls cross-country for a high school team in Boise, Idaho, and the season is going on now.

“I like giving back to the younger generation and instilling in them some of the same things my coaches did for me.”

Howard is currently unsponsored (in terms of a clothing/shoe sponsor), but she has partnered with a Boise-based nonprofit called RUJA, and wears a jersey with the RUJA logo on it to bring awareness to the organization’s mission.

“RUJA rescues children in Uganda out of child-labor and provides them an education and a family to raise them,” she said. Howard went on a mission trip with RUJA two years ago. 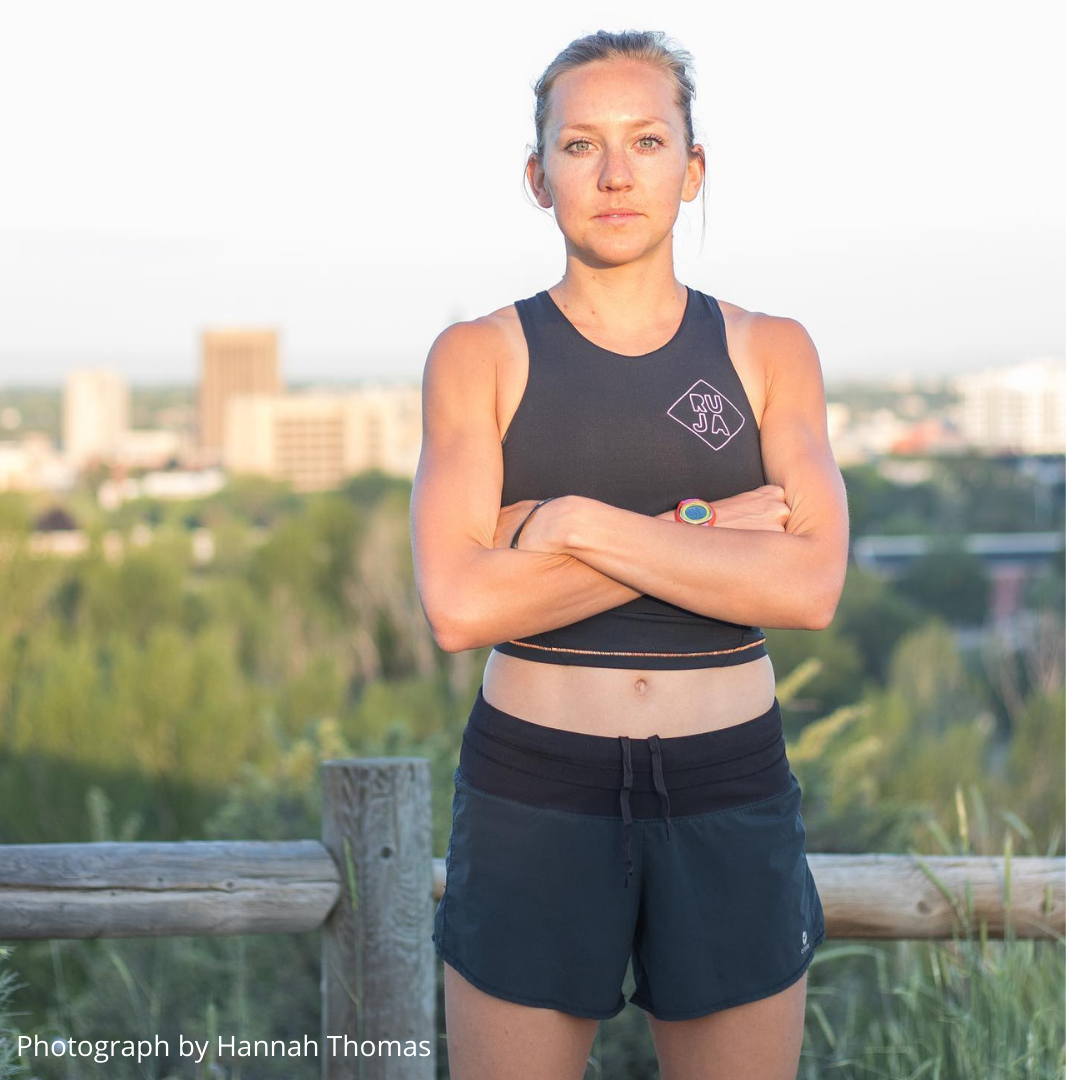