Steven Horvitz, DO, was a 25-year-old third-year medical student when his father, Dr. Norman Horvitz, died of obesity-related complications at the age of 55.

Ironically, Norman Horvitz was national medical director of Nutrisystems (now NutriSystem) weight loss centers at the time of his death.

The tragic loss for the Horvitz family had a profound effect on the direction of the younger Horvitz’s career.

“It was shocking and life altering for our entire family,” said Horvitz, who has been practicing family medicine and primary care for the past 27 years.

“This was preventable, and I thought I can’t let this happen to me or anyone else,” Horvitz said. “Throughout the rest of my training, my thoughts were on what we can do to prevent illness.”

Dr. Horvitz believes too much of the focus in traditional primary care involves following guidelines, many of which do not actually prevent illnesses.

“My father lived every day to the fullest, and he had a great life. If he wasn't working or playing, he was eating and sleeping. He loved every day he was here. But just like in most families, food was celebrated, and he celebrated a lot.”

“They've been told so many times that fat is bad, and carbs are good. And they’ve been told plants are good and meat is bad. But there's very little true research and data that supports that. They have to get to that point where they start questioning authority to get the right frame of mind to make the changes they need.”

“One thing people fear more than anything about changing what they're eating is that they're always going to be hungry, they're always gonna be craving, and they're gonna be miserable,” said Dr. Horvitz. “They worry that they can't get food out of their head. And obviously, if you're eating a diet that gives you satiety, that problem is gone.”

The solution for many, according to Horvitz, is to restrict carbohydrates.

“We've been too carb heavy and too fiber heavy, and I don't think the data and research really shows that that works. We have to learn to eat when we're hungry, and not for other reasons. As soon as you lower the carbohydrates, it's very easy to not want to eat all the time.”Dr. Horvitz also stresses the importance of protein in the diet. For an average person, he says between one and two grams of protein per kilogram of desired body weight per day is a good starting point. Other factors, like resistance training, age, and stress also come into play.

Dr. Horvitz strongly encourages his patients to engage in resistance training to build up and maintain their protein reserves. 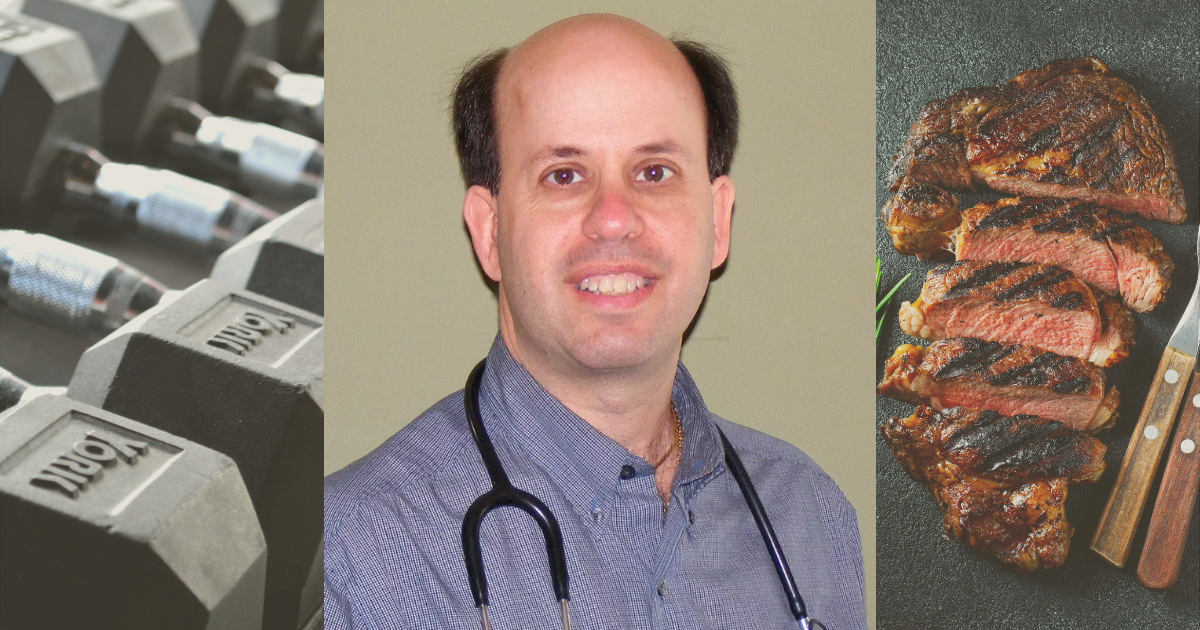 “Your protein reserve is in your bones, your muscles and your organs,” said Dr. Horvitz. “If your body is deficient in protein, it's going to pull from there, and that can lead to you getting weak and sick. So you need as much reserve as possible. So do what you need to do to increase the muscle mass and keep the bones strong. And to do that, you need protein and you need resistance training to build it up.”

Dr. Horvitz says adopting a healthy way of eating yields a multitude of other benefits as well.

“Patients get that level-headed clarity in their brain, they feel a consistent energy level throughout the day, no dips, no brain fog—satiety is a wonderful thing,” he said.

“I've always wanted to focus on preventing illness,” said Dr. Horvitz, “as opposed to just trying to put out fires.”

One of the obstacles to preventative medicine, according to Dr. Horvitz, is the insurance-based system, which generally doesn’t allow practitioners to spend the time with each patient to create an individualized plan that can help them improve their overall health and prevent disease.

“A pill isn't always the answer,” said Dr. Horvitz. “Sometimes it helps, and sometimes it’s a cure, but many times it's just a band-aid, and band-aids don't prevent the damage from occurring, they often just mask the damage.”

Dr. Horvitz founded the Institute for Medical Wellness, a direct primary care practice based in Moorestown, NJ, in 2008.

“I moved to direct primary care to give myself the time with patients to be able to actually discuss diet, lifestyle and other options, along with whatever traditional medicine offers,” said Dr. Horvitz. “Diet and lifestyle are a huge part of it.”

With a focus on improving metabolic health through lifestyle changes, Dr. Horvitz believes many people can avoid or eliminate the need for many medications.

According to Dr. Horvitz, traditional medical offices frequently treat biomarkers simply as numbers without trying to determine what that number represents or why they may be outside a normal range.

“The treatment usually consists of a prescription medication that may fix the number, but does not necessarily fix the process that caused the number to be at risk in the first place,” said Dr. Horvitz. “This type of treatment can give a false sense of security for one’s health.”

Dr. Horvitz prefers to suggest modifications to diet and lifestyle with the goal of improving biomarkers in a way that truly lowers risk by helping to fix the process.

“For example, I am not a fan of cholesterol lowering medications, as these drugs known as statins do not get to the cause of heart disease. Lowering cholesterol by pharmaceuticals does not, in my opinion, lower heart disease risk. Measuring cholesterol levels and other biomarkers are very important in gauging risk. but we want to dig deeper to get a better understanding of what each biomarker is doing for you, both good or bad.”

“The centerpiece of what we do,” said Dr. Horvitz, “is getting people to understand what foods you need to eat and drink, and other aspects of lifestyle, sleep, and stress reduction. If you can't make those changes, there's not a whole lot else I can do because I can't just give you a pill to fix your health.”

Dr. Horvitz recounted the story of a patient with type 2 diabetes who came to him about eight years ago. The woman had a creatinine level four times the normal level, and had been told by her nephrologist that she was likely to require dialysis in the next six months.

“Her kidney doctor was amazed and told her, ‘whatever you're doing, keep doing it.’”

Two months later, the woman had gained all the weight back, and her creatinine level was back above 4.0.

“I asked her what had happened and she told her family wasn't comfortable with her doing this type of diet. They told her they thought it was going to harm her. So she went back to eating what she had been eating before."

“Three months later, I saw her at Wegmans. And she was preparing to start dialysis.”

Being invested in one’s own health often plays a critical role in determining the chances of one’s success, according to Dr. Horvitz.

“A person needs skin in the game,” said Dr. Horvitz. “The motivation comes from the patient's knowing what they want, doing their research and seeking out someone they think can help. Since my practice is direct primary care, they're seeking me out and they’re paying me a monthly fee. They're invested, they're motivated, and they usually really want to make it work.”

Dr. Horvitz believes patients should question the advice they are given, regardless of the source.

“I tell them to question me,” he said. “If I say something that doesn't sound right, ask me why. If I can't explain it to you, then it may not be right. If I can explain it to you well, and you understand it, and it makes sense, then you try it to see if it works. Don't be afraid to ask as many questions as possible and understand the why. And if you do that, I think you have a better chance of being successful and improving your life and your health.”

Dr. Horvitz does a lot of lab testing in his practice, and believes that reviewing the results in depth with patients is critical to helping them improve their health.

“We follow their results on the scale, their blood pressure, A1C, insulin, how they're feeling, their satiety, and we explain to them why those things are the way they are. Then we review the things they need to do and tell them when we recheck those numbers what they can expect to see.”

“Then six weeks to three months later, when they're down 15 pounds and feeling better, we'll go over the repeat lab work. And typically they're no longer hungry, they're down weight, and their lab numbers have all improved exactly as I predicted.“

Update - Dec. 8, 2021 - Dr. Steven Horvitz was featured in Episode 70 of the Life's Best Medicine Podcast, which is sponsored by Simply Snackin'. It's a great conversation about direct primary care and some of the many challenges facing the standard care model.

“I've actually started bringing Simply Snackin' to my office. So if I decide I don't want a real meal... I'll bring like four of them to my office. And for a half-hour break, in between patients, I'll eat four of them. And that gives me 360-400 calories, but that's like 40 grams of protein and very little carbs--and I'm full.”

Dr. Horvitz also told us he discovered he likes spreading a little cream cheese on the Italiano Chicken flavor. “I love cream cheese, and since I'm at the office, and I don't have any silverware, I’ll take one of those tongue depressors, you know, those wooden things everybody hates? And I'll just stick it in the cream cheese and put it on.”

“The flavors are all good,” he added. “I haven't had one that I haven't liked, and all the macros are very good.”

He said he hasn’t traveled by plane since the COVID-19 pandemic hit, but he anticipates packing Simply Snackin’ for future trips.

“When I’m in an airport or on a plane, I always get hungry,” he said. “But what's there to eat in an airport? And on the plane if you ask for a low-carb meal, you get one little tiny piece of airline chicken. That doesn't work. I'm gonna bring a dozen Simply Snackin’s, you know, probably six for the ride up and six for the ride back. The portability is great.”

DRAFTED BY THE 76ers:

One incredibly interesting fact about Dr. Steven Horvitz’s father Norman, is that in 1983, at age 49, he was drafted by NBA’s Philadelphia 76ers, as described in this New York Times article.

Katz orchestrated the selection of Dr. Horvitz as a prank, but the N.B.A., unamused, declared Horvitz ineligible, and the budding NBA career was over before Horvitz had a chance to suit up for his first practice. 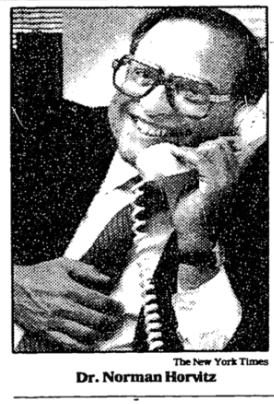